Have you ever heard of activating a shield?

Who is Charles Helmer?

He’s a young man, age 22, whose primary diagnosis is autism. His mother reports his behavior grew worse during toxic mold exposure. At that point he was involuntarily committed for psychiatric care on December 10, 2020.

Mr. Helmer has a history of ECT, which is why the court ordered more.

On January 7, 2021, the state of Minnesota held an ECT hearing stating a diagnosis of schizophrenia and ordering ECT “three treatments per week for a maximum of 12 treatments, and if successful, a maintenance phase of 1 or fewer treatments for the duration of the commitment.”

Forced ECT without regard to long-term patient safety.

They’re not thinking of ECT’s long-term consequences, as warned about by the FDA and device manufacturers, who state “The long-term safety and effectiveness of ECT treatment has not been demonstrated, and long-term follow-up may be needed.“

Disregard of the root cause of symptoms.

It was surprising to me that in the court ECT order, there’s no mention of his autism or previous antifungal medication to address toxic mold exposure.

For me, a person with acute environmental sensitivities since my own ECT, I know mold can cause psychosis, behavioral and sleep problems in people with a history of brain injury. I have the same problem.

But Minnesota doesn’t seem concerned that pulsed, high electric fields are not recognized by the FDA as a treatment for mold toxicity.

Helmer is competent to refuse treatment.

Mandated to receive ECT in excess of original court order.

Since the original ECT order, Mr. Helmer has been discharged from inpatient care. But, despite his no longer being involuntarily committed, he’s still mandated to receive ECT every other week—though the court order says ECT will last only for the duration of his commitment.

Historically, we know people receiving ECT who do not respond to psychiatric medication have a return of psychiatric symptoms within 4-8 days after ECT.

For that reason, some psychiatrists use “maintenance ECT,” though the American Psychiatric Association and Somatics, LLC (manufacturers of the Thymatron ECT device) state that “larger numbers of treatments” are associated with permanent memory loss and permanent brain damage.

Autism & sensory processing disorder likely to be exacerbated by ECT.

People without a history of autism who have a history of ECT frequently develop sound, light, and sensory sensitivity consistent with acquired brain injury.

The idea that ECT could be therapeutic over the long-term for someone living with autism is simply not evidence-based.

I figured if there were something I could do to somehow spare him from crippling effects of worsening sensory processing disorder and the other massive health problems I endure as a direct consequence of psychiatric treatment, I had to do what no one did for me—intervene. I did so with a plea to the state about considering the longitudinal consequences of forced shock.

For that reason I wrote to the Governor of Minnesota, Tim Walz.

If Minnesota is going to mandate ECT, there are at least 20 questions they need to consider before proceeding. 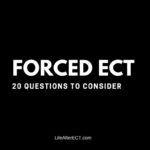 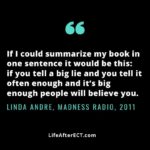 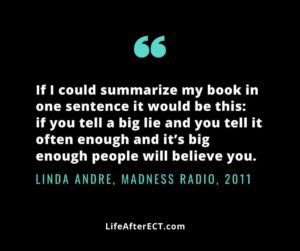 Should ECT be suspended? Experts weigh in.

“Most of the evil in this world is done by people with good intentions.” - T.S. Eliot

In case you’ve missed the coverage from @bbchw - here is today’s powerful interview with @CunliffeSue and @andyluff8 testifying to their lasting brain damage from poorly regulated (and in practice unregulated) ECT. ‘One of the biggest scandals in British medical history’? https://twitter.com/felicitykvesic/status/1392442215608340483

“We want an inquiry” - former ECT patients have been telling us their stories, listen here: https://www.bbc.co.uk/sounds/play/p09hbj4x
#herefordshire #worcestershire

“We want an inquiry” - I've been speaking to former ECT patients who have been telling me their stories: